We are expecting two, possibly three foals in 2021. Our first is out of our Rhiannon (Rascalino) and is by Wynton.  Our second foal due for 2021 is by Zhivago and is out of Vixen (Ferro).

Our current 2019 In-Utero sales include:

We also offer custom breeding contracts on any of our mares, including Embryo Transfers!  Inquire for additional information.

Roman Holiday, is a 2004 Premium Oldenburg mare by Roman Nature (Rohdiamant) out of Cortana (Cor Noir/Cor de la Bryere). “Holly” is an exceptional Oldenburg premium mare who represents the ultimate in type and movement for dressage. She has three outstanding and correct gaits which captivates your attention and epitomizes dressage movement. Holly herself is a premium mare who was the second highest scoring mare during her Oldenburg Mare Inspection in the country.

Holly is an incredible and proven producer of top quality offspring with four Premium foals to her name. Holly’s 2013 filly, Sandro’s Holiday by Sandro Hit, impressed the GOV committee with her beauty and movement, taking home not only Premium Foal but also Foal of Distinction and Champion Foal of the inspection. In addition, Holly’s 2015 colt Koraggio by Negro earned his First Premium status with the KWPN and Holly’s 2016 colt Richland by Richman has been designated a premium foal and stallion prospect with the Danish Warmblood Association.  In 2017, Holly produced a KWPN colt by Sir Gregory, Masolino.  Masolino combines the S, D, and R lines into one exciting foal.

Holly currently has premium offspring, including a stallion prospect, with FOUR registries; the GOV, Oldenburg NA, Danish Warmbloods, and the KWPN.

At the Westphalian licensing 2010, in Münster-Handorf, FRANZISKUS fascinated the audience. The premium stallion Franziskus already started his career as winner of the German Foal Championship qualification. An excellent type with naturally uphill conformation, a first class division of the body with sufficient harmony and correctness predestine this stallion for a brilliant future in competitive dressage. His basic gaits are nearly perfect: he walks with diligence and rhythm, he trots with impulsion and he canters uphill.

The sire Fidertanz started his phenomenal career in the year 2004 as NRW-Champion Stallion in Münster-Handorf. In 2005 Fidertanz won his 30-day-test in Neustadt/Dosse with best results and became Vice Bundeschampion with a top score of 9.5 in test-riding.

In the year 2006, he received the 1a-premium for dressage-stallions at the Oldenburg-licensing in Vechta. In the meantime, Fidertanz has been trained up to the advanced level in dressage.

In 2015 Franziskus won in the dressage KL S ** Inter I under Ingrid Klimke and has 11 licensed sons. Already in 2016 he won another dressage KL S * and was highly placed. 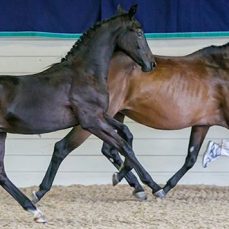 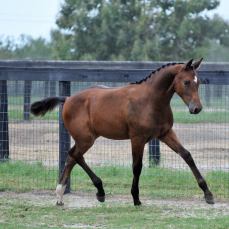 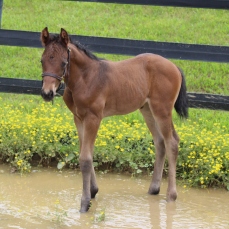 We are very excited about this cross between Sir Sinclair, Keur with our direct daughter of De Niro, Denira. We expect a very powerful moving foal, with three correct and lovely gaits, great shoulder freedom and lift, with an amateur friendly temperament.

Denira is a 2004 Hanoverian mare by De Niro out of Wiebke (Wertherson x Don Carlos).  Like our other broodmares, Denira brings strong dressage lines with some outstanding jumper blood as well. We love the added jumper blood to our broodmares. Denira not only brings outstanding bloodlines to our program, but she is also a super high quality mare in her own right. She is very beautiful and correct, is a lovely mover, and is super sweet.  De Niro is referred to as “the embodiment of the Hanoverian stallion” and is an exceptional stallion of superlative type and performance. In addition, there is hardly a stallion in existence that has had a greater influence in dressage competition sport and breeding alike than Donnerhall. Denira’s dam sire, Wertherson, a stunningly beautiful son of the great Werther. Wertherson competed very successfully at the FEI level of dressage and is know as a sire of fillies.

Denira herself is a very large mare and produces size.  She is also a very powerful mover and really has a lot of both pushing power and carrying power; which she passes on to her offspring.  In addition, Denira also passes on an outstanding temperament to her foals.  Offering both power and an outstanding temperament, Denira’s offspring are both amateur friendly and yet talented enough for a professional.

Sir Sinclair is one of the most prolific sires of FEI dressage horses worldwide. He was ranked #1 Dressage Sire by the USEF in 2015, 2016 and 2017, and was awarded the Keur predicate by the KWPN for his excellence as a sire.

Sir Sinclair’s athletic ability was obvious at an early age. He began his career as an impressive young athlete, placing in the Top Ten in the prestigious PAVO Cup before being imported to the United States. Sir competed in the FEI Young Horse divisions, claiming the Six-Year Old Championship and Five-Year-Old Reserve Markel/USEF Championship. He continued moving up the levels to Prix St. Georges and Developing Horse with scores as high as 72%. Sir successfully schooled and showed great talent for Grand Prix, but was unable to compete due to chronic lyme disease.

We simply cannot say how excited we are about this cross!  These lines combine some of the worlds top German blood and guarantee  an outstanding mover and a top dressage prospect.  Darcy Diamond is a 2007 Imported Hanoverian mare by Diamond Hit (Don Schufro out of Loretta – the dam to Sandro Hit) out of the Cheenook mare, Hauptstutbuch Capricia.  Darcy Diamond was schooling the upper levels before a career ending injury.  She has three superior paces and an outstanding and amateur friendly work ethic.

Foundation is a stunning young stallion with an impressive, beautifully rhythmic and powerful gait. Foundation is a dynamic mover with an excellent hind leg action and exceptional presence.  He scored 2 x 10,0 for his Trot and Canter and a 9,25 for Ridability at his 30 day Test in Schlieckau.

His sire, Fidertanz, was the brilliant North Rhine-Westphalian champion stallion and is now competing in Prix St. Georges classes. He has produced numerous top-class horses, champion stallion Flanagan and several of his offspring are approved stallions. 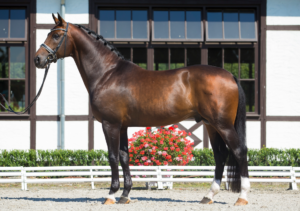 Foundation is a very interesting young dressage stallion with the same type, presence and prestige as his sire Fidertanz.